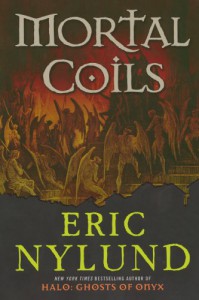 This book is epic in every sense of the word. I am pleased that upon a second reading, it was just as good as I had remembered. It's got:

A battle between good slightly good not very bad kind of evil vs. evil

An interesting spin on demonic mythology

A series of tests, in the form of trials and temptations

And the cherry on the cupcake...refreshingly little romance Sometimes a book just clicks. This book was just what I needed to refresh my mind in between the terrible books that seem to enjoy bombarding itself at me.

Eliot Post and his sister, Fiona, would be fifteen tomorrow and nothing interesting had ever happened to them.

Eliot and Fiona are the most socially stunted 15-year old twins in the entire world. And it's all thanks to their grandmother. They are orphans, parents mysteriously dead, oh, somewhere, somehow. The only family they've got now is a terrifying grandmother who is more military commander than cuddly old cookie-baking grandma.

It was Grandmother always. It was never Audrey or Gram, or any other pet name like they used with Cecilia. Not that it was forbidden, but Grandmother was the only thing they ever thought to call her. It was the only title that carried the authority her presence demanded.

And a cookie-baking great-grandma who seriously can't cook anything for shit. They've been home-schooled their entire lives. Their lives are dominated by rules, ranging from NO LISTENING TO MUSIC to NO READING BOOKS DEALING WITH MAGIC.

Seriously, their grandmother has a fucking list of rules for them. They've been forced to work hard their entire lives, there's no easy ride for them. From cleaning the apartment unit when they were young, to working their asses off doing menial labor in a horrible pizza shop, Eliot and Fiona's life can only be described as miserable. They can't even have candy. Even a half-eaten piece of chocolate, found in the trash, is considered a special treat. They wear homemade clothes (ugly ones). They never, ever go out. They have no friends but each other.

He and Fiona might as well have been corked inside a bottle, sailing nowhere on a tiny balsa-wood ship.

But all is not as it seems. Eliot and Fiona...surprisingly...caught someone's attention. Someone who recognizes their potential, through the altogether normal appearance.

Yes, the boy’s eyes, the slender but strong bridge of the girl’s nose, the high cheekbones and arching brows on both. How could she have missed it? Whoever had camouflaged them had done a masterful job: they had transformed divine into dull.

And with that, the dam bursts. No shit, they're not who they seem. Neither is their grandmother. They have a newfound extended family they know nothing about. A family that's all sort of magical, but not altogether friendly. Eliot and Fiona might get killed just for being born. Unless they pass The Test.

“Let the record show,” Aunt Lucia declared, “that we shall test the children’s potentials with three heroic trials. This will illuminate their characters and determine their lineage. It will prove their possible worth to remain alive.”

But that's not the only family they have to be concerned about. As bad as these relatives seem...there's the other side of the family...a side that may be even worse.

Meanwhile she had to prepare for the gathering of the Board. There were weapons to sharpen and armor to mend. Indeed, one did not face one’s brothers and sisters without taking careful precautions against carnage and bloodshed.

Eliot and Fiona will fight for their lives. They will face tests, temptations. Crocodiles and chocolates. Yes, you read that correctly. They will face attempts at seduction, they will discover powers they never knew they had. Challenges abound. They will learn that there is so much more to them and their families than they ever knew. Will they conquer their challenges? Will they fall? Will they succumb to the light? Ok, the slightly shadowy...or will they fall to the darkness? Above all else...they have to trust each other. They have to stick together.

She gently pushed them away. Tears were in her old eyes. “Be brave,” she whispered. “Do no let them separate you. You are stronger together.”

Together, they are strong. May the best side win.

Eliot stared into the darkness and wondered about his father’s side of the family. Why was no one talking about them? Uncle Henry, Aunt Lucia, and possibly Grandmother had murdered. Could the other family be somehow … worse?

This book takes a number of mythologies and gave it an exceedingly interesting spin. There are demonic creatures from Christian mythology and other legends who come to life...and who become other characters here. It is half the fun guessing who the characters are. From the "dark" side, we have characters like the seductress Seeliah, the deadly beauty with a secret soft side, a fighter and a queen in her own rights. On the "good" side, we have characters like the beautiful, deadly Lucia. The charming and conniving Henry Mimes. Good and bad are all relative here, no pun intended, because good or bad, each side is out for their own best interest, and no game is too dirty to play. With families like these...who needs enemies?

Familial love: I absolutely love the portrayal of complex family relationships in this book. It is a battlefield, but above all else, there is loyalty. One may want to kill one's sister at times...but blood ties stand above all. It is a rather "Mafia"-like relationship. You wouldn't ever want to turn your back on a relative...but when it counts, you know they've got your back.

Fiona might have tried to drive him crazy, dreamed up the worst insults in the world to throw at him, but she’d never in a million years have snitched on him.

...Slash hate. I absolutely love Eliot and Fiona's relationships. They have only ever had each other. They have never had friends. They don't always get along...in fact, they hardly ever get along...but they're fiercely loyal to each other because of that fact. When you have lived your entire life a step up from abject misery, forbidden to have friends, forbidden to go to school, to be with your peers...you feel closest to the one who knows what you're going through. They have an...interesting relationship. There is a considerable and constant amount of rivalry with each other, academically. There's seriously NOTHING else they can do to keep themselves entertained but to fight with each other. They compete by playing word games...seeing who can best insult each other using the most obscure words. Hey, we all have to get our fun somewhere. As much as they claim to hate each other, Eliot and Fiona know they can rely on each other. Fiona is fiercely protective of her brother.

An image of Eliot, beaten and bloodied, flashed through her imagination—and her only thought was to protect him. She yanked the rope.

Eliot, in turn, knows to be there for his sister when she needs him most, even if she seemingly doesn't want him there. They have an unspoken YOU ARE SO GROSS I HATE YOU DON'T EVER TOUCH ME pact. A pact that is broken when they need each other most.

She grabbed Eliot’s hand. Normally this would have violated their brother-sister-never-touch-me agreement, which had been in place since they had been toilet trained. But tonight, Eliot let her.

I absolutely adore a good sibling relationship, and they don't come any better than this book, but that's not to say the twins themselves aren't excellent characters, alone.

She wanted to be Fiona Post … whatever that was … shy and awkward … scared … but herself.

The older twin, the wiser, more cynical twin. The warrior to her brother's poetic soul. Fiona is awkward, unsure of herself, wishing, like most teenaged girls often do, that she could be stronger, more confident, more beautiful.

Fiona would have given anything to be as confident. Every time she had to talk to strangers, her heart pounded so hard she could barely hear her own mouse voice as it tried to squeak out something clever. If shyness were a disease, Fiona would have been rushed to intensive care and put on a social respirator.

Throughout the book, we see her bloom. From a shy, stammering girl afraid of everything to a warrior goddess who stands up to challenges, who is capable of killing when she needs to, who finds strength to stand up against the most powerful of temptations. What I love about Fiona is that she is not perfect. That she is bitchy on occasion, but she has a tremendous amount of loyalty and love for her brother and her family. That is a main character I can stand behind.

“I’m here,” he whispered. “I’ll always be here for you.” Behind the door, Fiona quietly started to sob again. Eliot didn’t let go.

The gentle, soft poet. The musician who doesn't know what he's capable of. He is more compassionate than Fiona, weaker than Fiona, but at the same time, stubborn and strong in his own way. He, too, grows from a spineless boy who's all-too-conscious of being smaller, weaker than his twin, into someone who finds strength and power in a skill he never knew he had. This is one of my all-time favorite book. It is a long book, but I assure you, it's so worth the time investment.